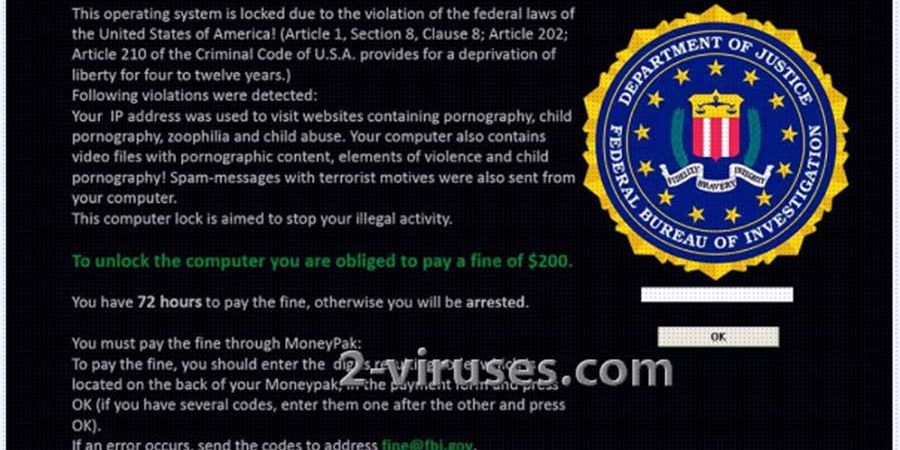 FBI and related scams steal your computer and your money

Recently, I had the opportunity of giving back a customer’s computer whose computer had been locked by someone who had wanted big bucks to unlock her computer.

Her computer was locked in a way that I have never seen before.   A screen told her that her Microsoft license had expired and she had to call a number. After she paid $249.00, her computer still remained locked and so she called me.

I told her that Microsoft does not charge for extending one’s license. There is a one time charge when you buy the operating system or when you buy a new computer it is included in the cost.

This person or company had no web presence, but they gave a false web address. The number given would not work. It was if the person had vanished.

This person was crafty because he erased all of her restore points.  So my solution was to reset her computer after saving her files and pictures. I did check the registry but didn’t see anything. It was probably there, but without anything to go on, a search was futile.

Cyber Crime is up, in a big way

Cyber Crime is up for 2016 and up in a big way. You have probably heard of the news that the Democratic National Committee was hacked by Russian intelligence.

Cyber Crime has many different forms, but locking up one’s computer is probably the most difficult to deal with because one has to deal with encryption or other means of locking up the computer.

If one has a back up of one’s files, then the solution is pretty simple and that is to do a clean install and implement the backup. I always recommend to my customers to do a backup and instruct them how to do it. I also give them a system disk for their operating system.

However, strange as it seems most people do not have a backup and that poses a problem. There is software that can transfer files but you have to do it from a boot of the software. This can be costly if the files are numerous.

I have also removed many types of locking malware including the Moneypak virus which is called the FBI or DOJ virus which locks your computer and displays an image of the FBI or DOJ saying you have violated laws. It is usually infects through spam emails or fake torrent files. It can also infect android mobile phones too by locking up your phone which you can’t use. (The official FBI website offers tips for protecting your computer, the risk of peer-to-peer systems, the latest e-scams and warnings, Internet fraud schemes, and more.)
One type of malware encrypts your files and makes a copy of the file. Then it deletes the original. When this happens, one removes the malware and then tries restores the files. Restoration of files is difficult and sometimes does not always work.

Be wary of who you let take control of your computer

Scammers can also contact you by telephone saying they represent Microsoft and they have found problems on your computer. The scammers will scan your computer and show you problems which are not really problems. Then they will say they will fix the problems when you pay them.

In one case, the scammer locked the customer’s computer in safe mode and the scammer asked for exorbitant fees for fixing it.

Never, never allow anyone to come on your computer to do a repair except one you really trust like Norton or Perry’s Computer Repair. One of the clues of a scammer is he has a thick Indian accent who says he represents Microsoft.   He asks to come on remotely and then pulls up event viewer showing errors to convince you. Microsoft will never contact you out of the blue.

If you don’t pay, they lock your computer using a syskey encryption on the SAM registry hive. This is the most difficult lockup to solve and involves some pretty difficult registry work.

Preventing these kinds of attacks requires several layers of protection. Malwarebytes has new software called anti ransomware. It is a beta form but can be used by going to the Malwarebytes website.

The best form of protection starts with the user.